The anatomy of a basic animation 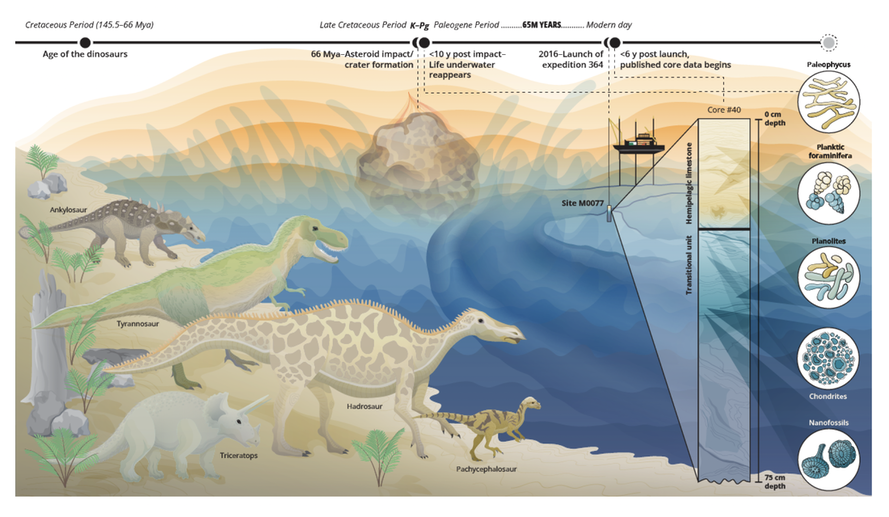 The Project: Produce a ~15 second animation (or a static illustration should time run out) depicting the moment of impact of the asteroid that ended the dinosaur age, for the NSF Science Matters article, "A moment that changed the world."

The Target Audience: The general public.

The Approach:  This event has been visualized many times over, AND in gorgeous detail. Given what I needed to execute an animation and the time I had to do so, I chose to render in a full-vector, simpler style that would be infinitely editable. I also wanted to include information coming out of the data from the 2016 expedition to obtain core samples from the peak ring of the Chicxulub crater. Researchers hoped this data would elucidate/confirm answers to several questions, including: how soon did life underwater reappear in the crater environment?

FIRST SKETCH: My first attempt was to focus on the modern day, with a vignette of the drill lift boat (L/B) Myrtle in place above the peak ring site to set the scene. The majority of the space at right is then reserved for 3 planned animated scenes. 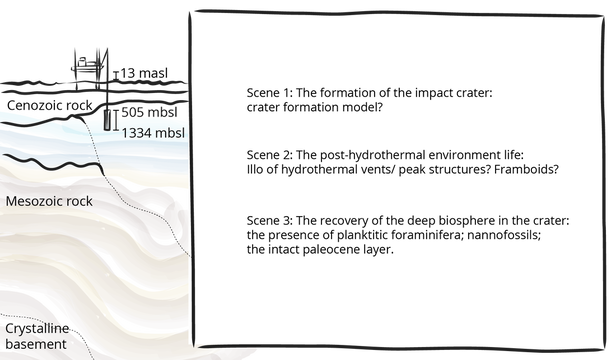 Credit: A. Kitterman/National Science Foundation
​
​The Client was wonderfully open to my suggestions, but kept asking to add in the dinosaurs and the asteroid; I would finally understand the importance of including these elements when reading the opening paragraph. The trickiest part was to then create a pleasing illustration that satisfied the "dinosaur-ophiles," but would have flexibility in function when compared to a pixel-based painting.

REVISED SKETCH: ​Open with dinosaurs (check) and asteroid impact event (check). The right half of the scene continues the story beyond asteroid impact. The layout is designed for a static and an animated product. 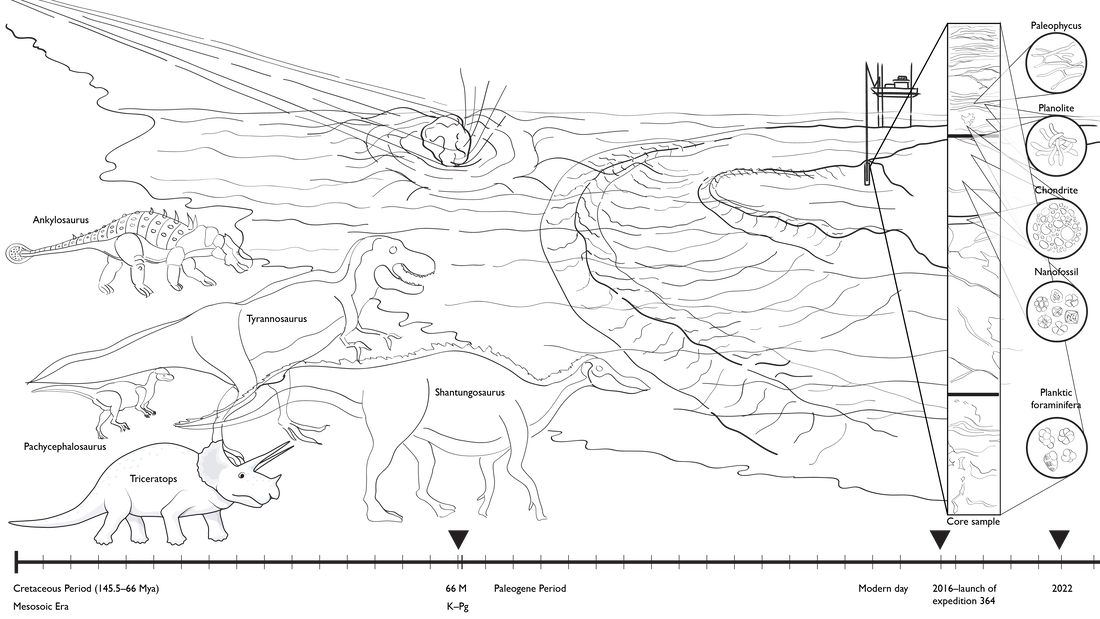 Picking the animation apart:
The Bones are the building blocks to be animated.

The Skin provides the packaging and is defined by rendering style. As mentioned before, I needed to design this first and foremost as a static illustration, and then plan for different levels of animation depending on the time I had left. Furthermore, with every project, I think about how whatever I draw can be repurposed: for example, the triceratops was modified from a previous illustration I had done, and so editing capability/flexibility adds value to anything created from scratch.

Although not necessary, I try to use the branding color palette exclusively when creating illustrations--adding only 1-2 outside colors if necessary--so that they feel branded. Other considerations like 508(c) must also be strictly followed: text overlying color fields must pass color contrast ratings for small type.

TOTAL TIME for rendering: 2 weeks.
​The Organs do the work, so which "organ" functions best for which animated feature? In other words, what kind of movement best visualizes what is happening in the storyline? And how do deadlines affect planning?

If I had two days to complete the animation scripting, the next level would introduce spatial movement in key elements: instead of the asteroid dissolving off from one spot and dissolving on at another spot, it physically moves left-to-right through the sky.

If I had 3 days to complete the animation scripting, the most complex level would increase the number of spatially-moving elements, plus use special effects to describe the events themselves (like a particle world to depict the asteroid blowing up), or to add atmosphere (like water constantly rippling).

LAYER SET-UP for the Illustrator file that will be used in After Effects, has nearly 70 layers (left) and took a day to set up; AFTER EFFECTS COMPOSITION (right). Expect another day or two for file conversion, compression and any other tweaks to the final file itself.
The Brain is housed in a storyboard, a group of illustrations where each scene depicts a change from the previous one, thereby laying out the path/trajectory of the storyline.

This series of changes convey occurrences taking place in a specific sequence, telling the viewer that something has happened as a result of something else. He/she/they interpret/s them collectively as an unfolding narrative.
​
EXCERPTS FROM THE STORYBOARD showing a "slideshow-type" animation. The final art was created first before final planning of the animated version. 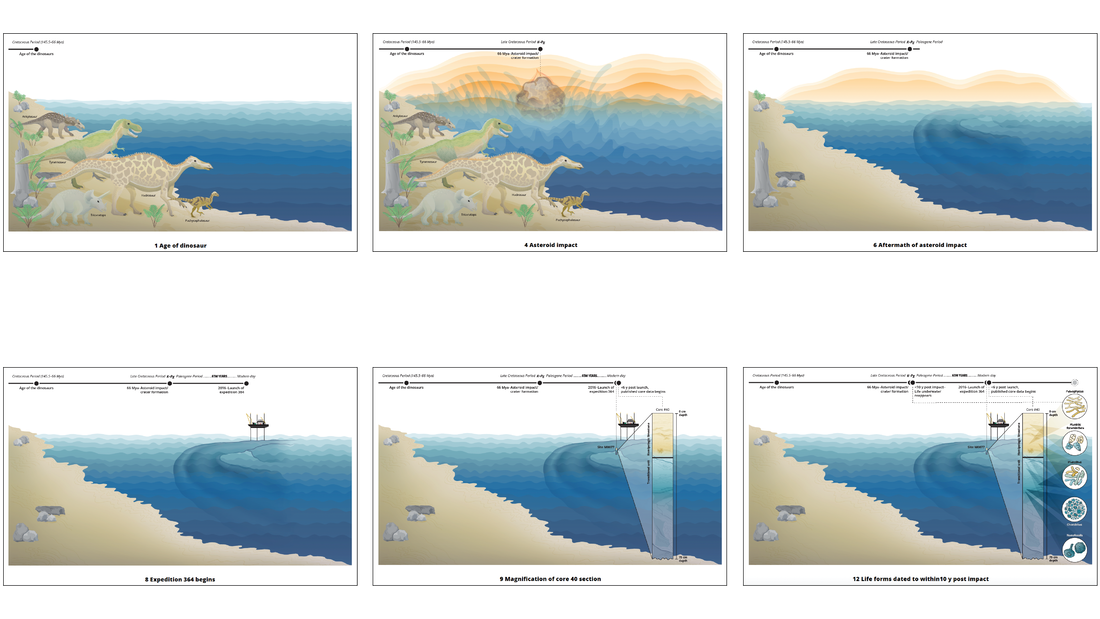 The Final Product was a 19-second, non-narrated animation:
​https://beta.nsf.gov/science-matters/moment-changed-earth?sf166210297=1

And that's a wrap! 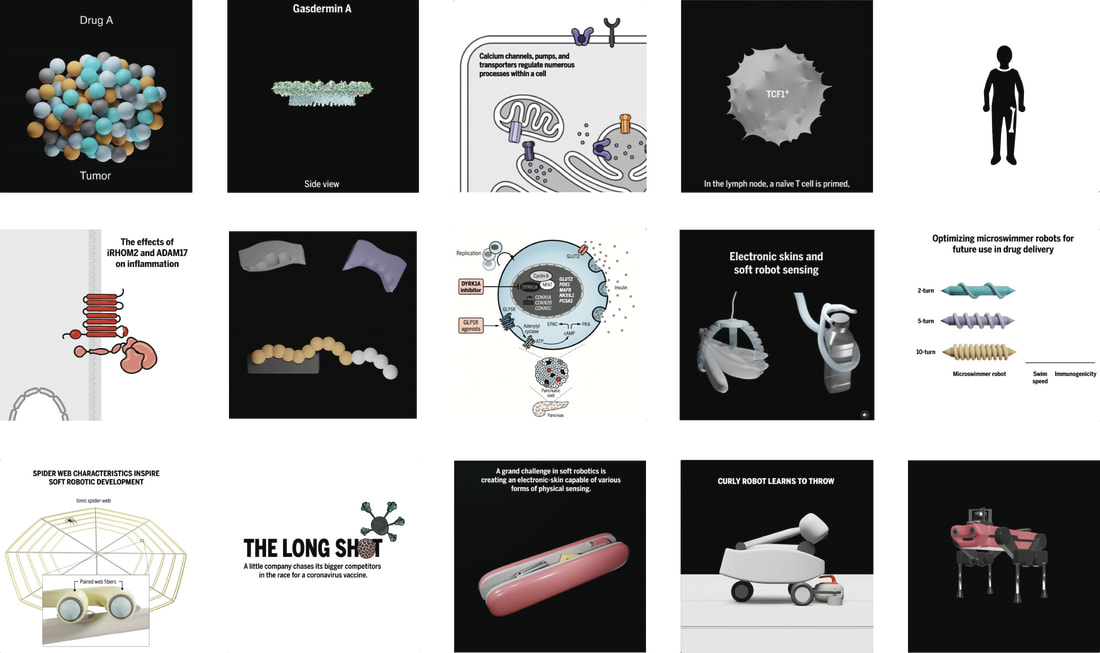